We are almost at that time of year when the most significant sales weekend apart from Christmas comes around. There are thousands of companies all tempting you with their Black Friday deals.

VPN service providers are no different and wish to entice new customers to their services. This can be great news for anyone who is in the market for grabbing a bargain while looking for a VPN deal.

To save you hours wading through the thousands of pages that have these deals, we have cut the wheat from the chaff and taken the top ten best VPN services to see what their Black Friday VPN deals 2019 have to offer new subscribers.

Read on to see which is the best VPN offer. You may find that the cheapest VPN at this time of year isn’t the best option, and can be a waste of your money. 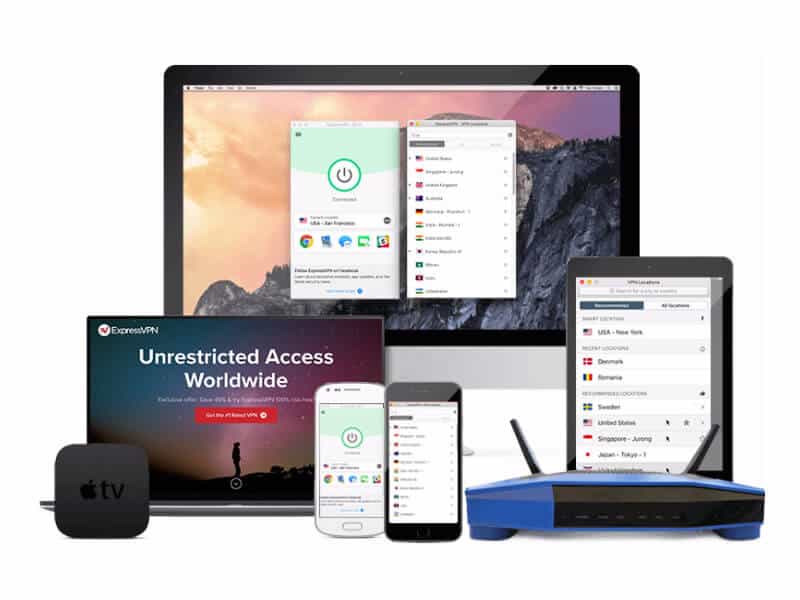 Deal: This year’s ExpressVPN deals from the world’s fastest VPN include a saving of 49%. If you sign up for the annual plan, it now costs $6.67 per month for this premium VPN provider.

To add to this, you also get three months free, taking the total up to 15 months for their special deal.

SAVE 49% with our Special Deal

ExpressVPN is the one all the others follow. With the best 24/7 live chat customer service, the fastest VPN network, and some of the best security.

Based outside any 5/9/14 eyes, this VPN offers the ultimate for online privacy.

They easily bypass all geo-restrictions for services like Netflix. They support P2P file sharing on specific unlimited bandwidth optimized servers.

With the best 30-day money-back guarantee, now is the best time to grab this deal. Check the features and performance of the number one VPN service provider, which is the best VPN for Netflix.

Deal: You will see this is one of the youngest VPN providers, and they offer one of the best Black Friday VPN deals.

You can save 85% on the price of their 2-year plan. You now pay $1.77 per month, but you will find you have three months free on this exclusive deal.

Being one of the newest VPN services, Surfshark VPN has a mountain to climb. However, it comes feature-packed with a double hop, camouflage mode, and a built in malware and ad-blocker. There is also a no-logs policy, and a clean warrant canary, to deal with online privacy.

It can be the best cheap VPN when using their Black Friday VPN deals. It runs on many devices and offers top of the range secure encryption. When it comes to P2P traffic, there is support on all servers.

Streaming is taken care of and is passes blocks on streaming services like Netflix (7 libraries), Amazon Prime Video, and others. Hulu being one failure.

Deal: Here, you can grab a 73% discount on the companies yearly plan. This can be one of the best VPN deals on the list for a big-name provider.

Now, you pay $3.25 per month for the 1-year subscription and billed annually after. They do offer other deals, but this is the best of the three.

There is a 7-day money-back guarantee, which should be enough for testing.

IPVanish VPN is one of the most notable names in the industry. So, it was a shame they lack in a few areas.

With good speeds, a wide range of device compatibility, and ten connections. It was a shame they suffer when streaming.

In this little IPVanish review, we saw unreliable Netflix connections on most libraries, as well as no access to the BBC iPlayer.

Security is better, and they are as good as many other virtual private network providers. They use the best protocols for encryption and have an excellent no-logging policy.

It comes out as a cheap VPN and is an excellent choice for anyone who downloads and wants to remain anonymous while browsing the web.

Deal: For a limited time, you can grab the NordVPN best deal of 70% off the regular price. This is on their 3-year plan, where it costs $3.49 per month.

You also get three months free. With this VPN subscription, you have a 30-day money-back guarantee. So, it can be one of the top deals best suited to privacy and security-conscious users.

Our quick NordVPN review looks at the number one privacy-focused virtual private network from most other service providers.

With the best secure encryption and protocols, Tor over VPN, and a double-hop feature that bounces VPN traffic over multiple servers.

Any user can remain out of sight when online using this highly encrypted VPN.

With over 5,100 servers, it is surprising to see speeds drop in Asia, as tested by Ookla Speedtest (owned by Ziff Davis).

However, all speeds are good enough for HD sports streaming. There is lots of P2P support, so users can download without compromising their personal data.

Deal: The best offer Cyberghost VPN can come up with is 2-months free when signing up for the 3-years plan. Add to this the 79% discount, and you pay $2.75 for the monthly price, and billed as $99 every three years. Cyberghost offers an industry leading 45-day money-back guarantee.

Cyberghost can be one of the best deals on VPN services if you sign up for an extended period. It delivers top-level security and encryption, so it is perfect for the users who are new to using a virtual private network.

Behind the cartoonish interface are the same secure protocols, and encryption. There is plenty of device support, and users can find it easy to accomplish their tasks while online.

This secure VPN may be awkward if you try to make changes manually.

Servers support P2P, yet you select this from a list rather than diving into a separate server list.

Streaming is the same, and you can choose from the most common such as Netflix and Prime Video. These are standard in the list of the best streaming platforms you may require.

Deal: Our PureVPN review saw one of the biggest tech deals this year. With 82% off on the 3-year subscription, you pay $1.92 without needing any coupon codes.

This can be the lowest price because it works out cheaper than their 1-year plan.

This VPN company covers 140 countries with 2,000 servers. It bypasses geo-blocks to access the leading streaming platforms, as you will see in their list. Secure servers also cater for P2P downloads.

There is split tunneling, unlimited-bandwidth use from the company claims to be the fastest in the world.

There is a 31-day money-back guarantee and 5 simultaneous connections. This means you can test its claims to the full.

With top-level encryption, users are safe and secure for all their online activities. PureVPN is outside any jurisdiction. However, it is Hong Kong, so it does have strong ties to the UK.

Deal: Private Internet Access has Black Friday discounts on all plans, so they have the best deals.

It appears they have changed again, and now you can get 6-months free on the two-year plan for only $2.33 per month. A one-year subscription offers three months free and a 73% saving.

Private Internet Access delivers top-class security, even when it defaults to 128-bit rather than 256-bit AES encryption. The server network numbers over 3,300 across 30 countries.

Fans of streaming may be frustrated, even if this is one of the better-known VPN providers. It will keep your identity out of sight, yet it fails somewhat.

It can bypass Netflix with some restrictions on which servers work, yet it fails with the iPlayer.

There is also limited customer support as there is no live chat, yet the other areas are top tier. Download speeds are above average, and there are no limits to your P2P, torrenting activities.

Once you view deal details, this may be a good option for users who don’t require much outside of privacy and don’t wish to pay much.

Deal: When looking at the deal from IvacyVPN, you can find the best free gift. There are two deals. Get 87% off with their 5-year plan that costs $1.33 per month. There is also the 2-years plus 1 year free for $1.50 per month. This is billed triennially.

IvacyVPN excels with customer service. While this appears strange, there are so many which fail with this.

There are lots of security features that are on par with the market leaders. With a kill switch, and the industry-standard protocols and encryption.

You can connect 5 devices, so any member of the family can stream from the mainstream platforms like Hulu Plus.

These can be selected from a drop-down list of VPN purposes, as can torrenting, which receives full support.

Ivacy may not have the most significant number of VPN servers, but they cover a higher number of countries than many.

Deal: The latest Cyber Monday and Black Friday deal from StrongVPN is a saving of 42% on their 12 monthly plan. This works out at $5.83 per month.

StrongVPN isn’t the first choice in many people’s minds. Yet it does offer reliable services, even if there are some quibbles with the service.

It offers a small network, yet manages to deliver some fast speeds. This is appropriate because it caters to most main streaming scenarios, including HBO, ABC, and Netflix. The BBC, unfortunately, was a no show on all their UK servers.

It is a trustworthy service that delivers some good privacy and security. On the feature set, there is nothing which stands out, and there are no gimmicks such as a free VPN offering, or unlimited device connections.

TunnelBear is mostly used because of its free version. While it may be limited with a monthly cap, users will use this for casual security while away from home.

While the service supports torrenting and keeps you safe with high levels of encryption protocols, the streaming side of things fails.

It was one of the first VPN’s to stop trying with Netflix and to add to that, and it doesn’t work with Hulu or the iPlayer. HBO did allow access on the plus side.

There are zero logs, an ad-blocker, which comes as a browser extension. To top all this, there is no refund policy, so if you consider this, do use the free version first.

Nearly everyone wants a bargain, and when you look at all the above, it can be easy to get carried away. There is more to a VPN than lots of features you may never use.

Stable connections and reliability are the two main features. Add to this, you need anonymity when carrying out your online activities, no matter what they are.

Now is a fantastic time to grab one of the bargains from the above. Luckily, the best VPN on the list happens to be the first one on the list.

With three months free, the rate drops even more, and the good thing is, there is no need to sign up for too many years.

ExpressVPN will be the best money you spend on a VPN. Even though it doesn’t deliver all the fancy bells and whistles others do.

It focuses on the core things users require. Privacy, speed, and everything else which will make sure you have the best trouble-free online experience.

It is the best deal, and when the Black Friday sales come around next year, it will more than likely hold the same position again.