MENUMENU
VPNStreamer > Streaming > How to Watch AMC in Australia

The AMC TV service was created. After some experimentation, a show was launched that caught the public’s attention.

Mad Men was the first TV show, which really took hold of the viewing figures. This was global, and not just in the United States. AMC followed with one of the best television programs ever written by any network. 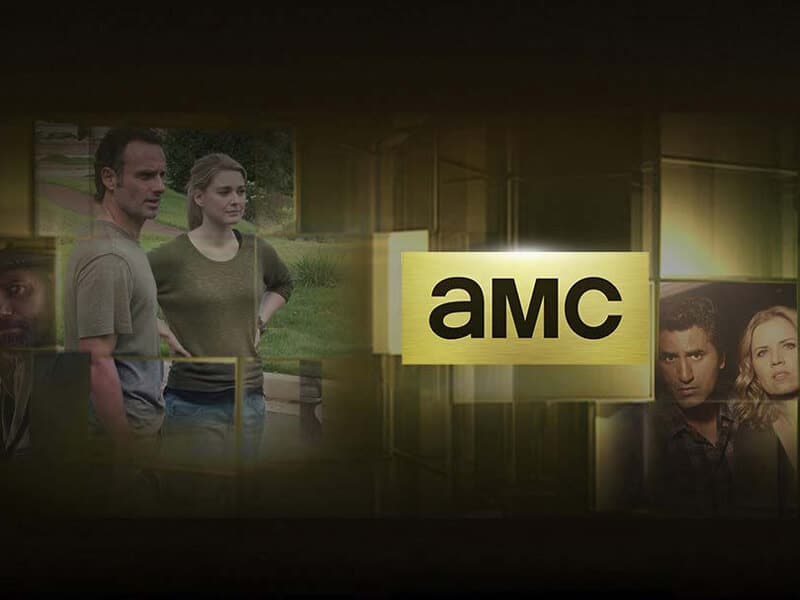 Breaking Bad was innovative and even had a spin-off that was equally well accepted. Better Call Saul pulls in viewers by the millions.

Audiences were altering the way they were watching TV thanks to the first AMC shows. Cord-cutting was at the top of everyone’s list to avoid excessively priced cable contracts.

Since then, the network has never looked back, and there are countless viewers around the world who want to access the network.

The good news is that it is one of the easiest to access with the use of a VPN. However, you need the login details of a streaming service.

This guide shows the best ways to view AMC online. You can do it from anywhere, and before you see how to access AMC’s streaming service, we’ll see what the network has to offer viewers.

AMC, What Does it Offer.

AMC has some of its own shows that are unique. Some of these are not available anywhere else.

Not just this, AMC Networks owns Sundance TV. In 2013, it became ad-supported and then in 2015 Sling TV announced it was going to make AMC channels available for the cord cutter. These included AMC, Sundance, BBC America, and WE TV.

Aside from Call Saul and the tales of Walter White and Jessie Pinkman, you can the latest seasons of The Walking Dead, Into The Badlands, Killing Eve, Fear the Walking Dead, and many more.

If you take a step back, you can watch full episodes of The Killing, Alcatraz, NOS4A2, A Discovery of Witches, Next of Kin, you can also watch the fourth and final season of Preacher.

Aside from many great shows and the movie side, there is the live TV side of the network.

When you head to the AMC website, you can find lots of content that is free, but the most current things you want to watch need you to sign in.

Aside from the website, you can catch content on AMC Premier. This is the AMC app, where there are free episodes and ad-free.

All of the following services allow you access to the TV app, or you can watch content directly through the service.

For on the go, there is the AMC app for Android and iOS. You can download full episodes and then take them on the go with you, and watch without a connection.

Where to Watch AMC

Each of the following services do grant access to an AMC live stream, yet to do this you do need to bypass any geo-restrictions with a VPN service. 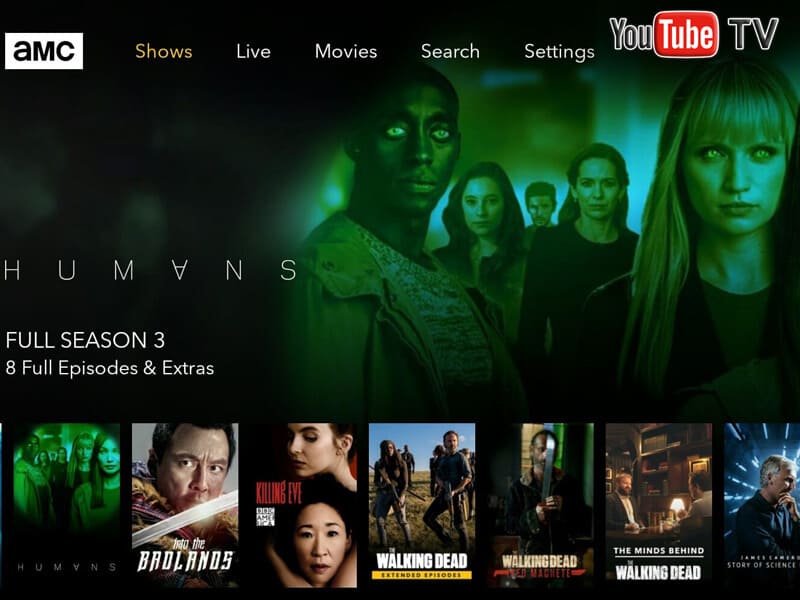 There are over 70 TV channels to choose from, and this is accompanied by free unlimited cloud DVR (lasting 9 months). You may have as many as connections per household in one account.

There is one plan, which costs $49.99 per month. The Premier channel app is $5 per month additional.

There are many compatible devices like such as Chromecast, Smart TV’s, Xbox One, Apple, and Android TV’s iOS and Android.

There is a free 7-day trial on offer, and its one services, which offers Premier as an add-on. YouTube TV is currently available throughout the USA, where previously it was restricted to specific locations.

You will need a VPN that allows you to swap servers at a city level to access some channels.

Fubo TV is a wonderful platform for people who love sports. The base plan may be thin in comparison to others, but you can alter this through the add-ons.

It has some local channels, but how far these reach does need checking because of area restrictions.

Fubo also has a 7 days free for new subscribers to test all the functions and watch AMC.

Hulu is one of the main rivals to Netflix. It delivers Live-TV and VOD content. It also comes with its own Originals.

Hulu has an exclusive licensing deal with AMC, and they should be able to deliver more of the AMC content, this doesn’t mean they have rights to everything.

There are several add-ons, such as HBO, Showtime, Entertainment, Cinemax, and others.

Cloud DVR is 50 hours, but it can be upgraded with a cost. Hulu offers a 7-day free trial with a live stream, but the VOD is a one-month trial.

Sling can be one of the most cost-effective ways to watch AMC online. It has been building up a reputation as one of the best live streaming services in the USA.

To AMC live stream, you need the Blue package. You can also go for the combination plan of Blue and Orange.

The downside with Sling presently is there is no longer a free trial period. In place of this, they offer a discount for the first month. This means you can’t watch AMC free using this service.

There is quite a bit of device Support such as browsers, iOS and Android, Apple TV, Roku, Smart TVs, Fire TV, and Chromecast.

Cloud DVR doesn’t come with the lowest plan, and if you upgrade, the oldest content is deleted and replaced with new content you have recorded. 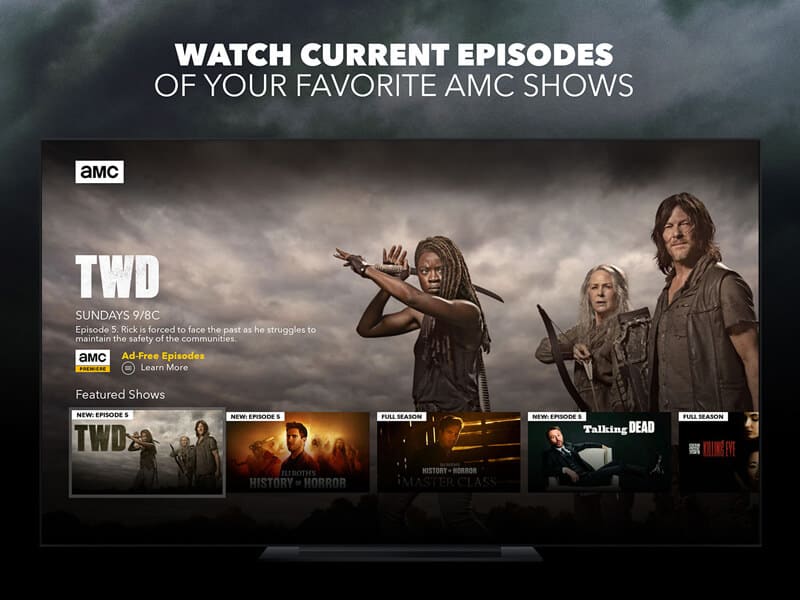 Streaming AMC with a VPN

All the above services require a VPN in one way or another to get the best from them. Sling, for example, won’t even let you navigate around the website without using a VPN.

This can be one of the major factors in choosing your service because they all cover certain markets.

However, when you use a good VPN provider, you should be able to change the outgoing VPN server down to this level with ease.

Top tier VPN’s will also offer the fastest download speeds. This prevents any buffering when outside the USA, no matter which country you are in. ExpressVPN is the best VPN for this because it just works. It also works on every device that the AMC application works on plus many more.

A prime example being ExpressVPN because it covers 94 countries and 160 locations. With unlimited speed, you can make use of the DVR services and binge watch on your device.

This is if you are in Australia or any other country. This is the best streaming VPN there is.

This VPN delivers the very best encryption that stops anyone from monitoring your online activities.

As soon as you are connected, it changes your IP address and can make you look like you are in the USA. This helps with online banking and your ISP from throttling your connection speed.

The list of features extends way beyond being able to stream AMC, and it can take time to explore all the features and benefits.

For this reason, they offer a 30-day money-back guarantee. This allows any user to try out the VPN for one month before paying anything.

Use it as a free VPN, and pair it up with the free offerings from the above services, and you can easily watch an AMC live stream free for this period.

To make full use of an AMC live streams, you need to be sure you use the top VPN services, which delivers, in every area.