Quite a few StrongVPN reviews rate this USA based VPN quite highly, although not in the top few. From what we can see, it does have a lot going for it, but also there are a few weak points which need ironing out.

Is there is enough I the service to make it a worthwhile option for Australians, or is it another hopeful which will be cast aside?

StrongVPN Netflix is working, and they should be applauded for this, many top VPN’s give up trying and don’t include this option, so this is a significant plus.

The other thing VPN’s are used for is torrenting, and StrongVPN also supports this, but for this to be any good, it depends where you are located as speeds can take a severe hit.

On the site, StrongVPN now only shows 2 plans, one being the monthly and the other their yearly offering.

The monthly option puts it squarely in the realms of many other providers who offer more, and in some cases, cheaper. But for the yearly option, you can save a whopping 42%,

Both plans offer a 30-day money-back guarantee if you decide to sign up. 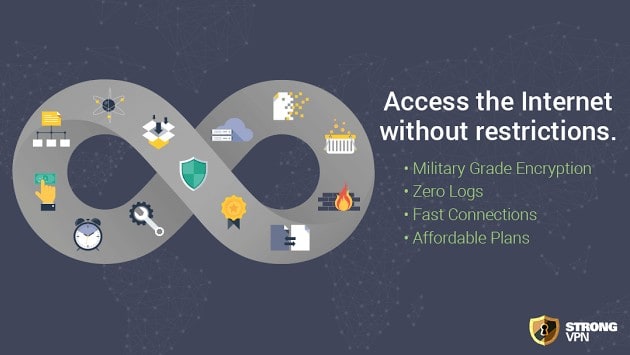 When you compare VPN’s for network size, StrongVPN doesn’t have the largest and weighs in with 650+ servers in over 20 countries. Most were in European countries and the USA. Here is Australia; we are treated to one location in Sydney.

It should be noted, when you connect, you are assigned a server automatically, and this might not be the closest or the fastest.

Before mentioning the protocols which the service supports, it has to be noted; not all protocols work o all their servers.

This requires a disconnection to change settings, which is a long-winded process and can’t be done from the client software.

The default protocol used is the not so secure PPTN (the fastest) other supported are L2TP, SSTP, IPSec, and, of course, OpenVPN.

A DNS service can be found with StrongVPN, and it is operated from a different site to which you log into. When testing, we found no DNS leaks although, this isn’t as secure and only allows site access from a remote proxy server without encryption.

StrongVPN client support is found for Windows, Mac, iOS, and Android, where automatic set-up occurs. Although not every feature works on each platform. The kill switch, for example, doesn’t work on a Mac.

You can also connect up to 5 devices at once. Tutorials are provided to enable you to set-up StrongVPN on other platforms such as Linux and routers, but for new users, this might be a little overwhelming.

When running through the tutorials, you can quickly see protocols that are supported for each device; this means you can have all 5 devices connected. They can be using a variety of differing protocols, thus levels of protection.

Although the service does use lower protocols on some devices/ platforms, when it comes to users’ privacy and security, the old question “is StrongVPN safe?” is quickly answered. Yes, it is safe for the level of the protocols being used.

One note is some users have found the IPSec protocol disabled, and the answer from customer support being, “It isn’t available on that plan.”

The only difference in the plan is subscription length, so you might be paying for something which you can’t get at the moment.

About overall security, a StrongVPN download doesn’t show any leaks, so you are safe knowing your data is encrypted as it should be, apart from the quibbles of the Mac kill switch, etc.

According to StrongVPN’s privacy policy, they don’t keep any logs of browsing activity, and only records of the time you connected/disconnected, the duration of the VPN connection, and the bandwidth used are kept. Much like other top VPN providers.

Signing up is straightforward and can be completed in minutes with the most regular payment options of credit cards, PayPal and Alipay.

Once you have chosen the option, you are sent an email with instructions to sign in with your email as your username, it then assigns you a password. For the VPN service or the DNS service, this requires separate logging in.

Installation is easy, but once you open the client, and make your StrongVPN login, you are presented with an outdated interface, which for new users can appear overwhelming.

For some of the options you wish to change, this requires you to log into your account rather than from the client software. Such as changing servers or network.

The majority of StrongVPN’s service is average, and they have no real killer feature, but one redeeming feature they offer, which some top-tier VPNs don’t is split tunnelling. With this, you can divert some traffic through the VPN while the remainder goes via your ISP as usual.

Unlike many other VPN services, there are no browser extensions available. This means it is your device that is protected or nothing at all.

With only one server in Australia, speeds are less than favourable for almost anything apart from regular browsing. During testing, speeds fell to less than 1Mbps for Australia or most of the Asia region.

For US Netflix and torrenting, this speed loss makes the experience all but unusable.

StrongVPN does have a 24/7 customer support service that can be contacted via email or live chat.

Although not the fastest, they do respond quicker than a few more popular names in the industry. Customer reviews also praise StrongVPN in this department.

StrongVPN does have a lot going for it, and it is one of the oldest VPN providers around. Still, being based in the US (5-eyes) and also offering dismal speeds for remote areas, it can be hard to recommend the service for use in Australia wholeheartedly.

There are signs they are improving, but they still have a long way to go to catch up, never mind leapfrog the market leaders — decent service overall, but not a first or second choice.