The 29th season of this American animated family drama is running successfully on Fox. With its launch in 1989, The Simpsons have become the longest-running US sitcom.

Not only the show but even the Simpsons franchise is doing well. There are t-shirts, books, DVDs, action figures and various other merchandise generating profits.

Until now, you may already have guessed that you can stream the Simpsons episodes on Fox’s online service Fox Now, isn’t it?

Yes, you can stream the Simpsons episodes online with Fox, but not all. To those without a subscription to the US cable TV, Fox only has the recent five episodes of the Simpsons.

And at the time of writing, you could watch as back as the fifth episode of the 29th season; Grampy Can Ya Hear Me. So, what to do to watch all episodes of the Simpsons? Take the help of Simpsons World, a website launched by FX network.

What is Simpsons World?

Simpsons World is a streaming service dedicated only to the Simpsons, a show portraying the life of the working class Simpson family.

The Simpson family has Homer and Marge Simpson and their three children – Bart, Lisa and Maggie. Set in the fictional town of Springfield, this half-hour show is a parody of the American society. 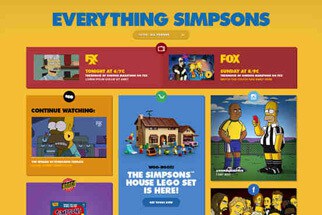 And if you want to watch any of the 600+ episodes of the Simpsons, online stream service of Simpsons World is the perfect place. It offers everything related to the series. You get curated playlists, clips, audio commentaries and of course the full episodes.

Stream Simpsons episodes and go back the memory lane, and it is available anytime you want. Pick any of your favourite episodes and watch it over and over as much as you can.

There also are many fun facts about the Simpsons there and even trivia. The service is available through the website or its apps.

The app is available for iOS, Android and also on Apple TV boxes and Samsung Smart TVs. So many resources available on a single platform (and for free) makes it impressive, but there also is a downside.

The service is available only to the viewers in the US. But there is a workaround for those in other countries.

One of the many ways to get all those resources is to use proxies. You request a proxy site, and the website passes your request to Simpsons World through their servers.

But the proxy sites is that they are not very reliable. They may not work every time, and there also are the issues with security and spams.

Thus, I would recommend you to subscribe to a VPN service (How to setup VPN here). Apart from a reliable connectivity option, VPNs also encrypt the communication network. Thus, providing you with privacy. 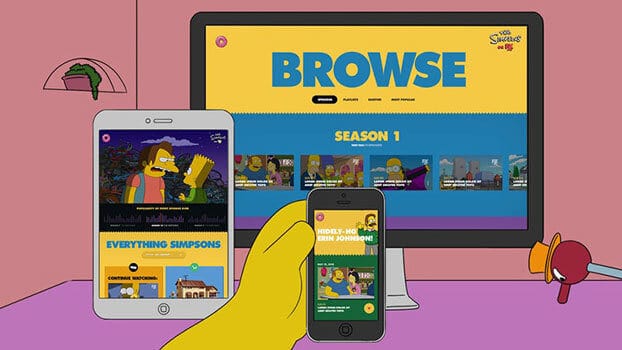 When you connect to a VPN server, the server also hides your IP address apart from encrypting the connection.

Once the IP address is hidden, the device receives a virtual public IP address. If you want to watch Simpsons World, you have to choose a US VPN server. Upon successful connection, your device – PC, mobile or whatever you are using – gets an American IP address.

Now, if you try to open the app or website, you won’t see the once familiar – The content is not available in your region – error. But now, another problem arises – which VPN to choose?

There are many VPN service providers, some are free, and others paid. The one I like using is ExpressVPN, a paid one.

Even with the best encryption system, it does not slow down the network speed. The streaming speed you get with ExpressVPN is one of the fastest. Moreover, it has servers in many parts of the US.

Even if your preferred one is offline, you can switch to another with a click or two. And the best thing is, it has software clients available for almost all the streaming devices.

You can set it up quickly and is also very easy to use. Check our detailed ExpressVPN review to know more about the service. Subscribe to ExpressVPN now and dive into the world of the Simpsons.